How can the head of a business school rocket an institution’s public image to prominence? Account Director Stephanie Mullins, from specialist business education PR consultancy BlueSky Education, shares her thoughts.

Business school Deans have an extensive and complex role in the anatomy of their institution, but the contribution crafting their public image can make to achieving the school’s wider goals cannot be underestimated.

Deans hold responsibility for cultivating relationships with both internal staff and external stakeholders, including donors, alumni, and the business community. They are also responsible for protecting and building on their school’s assets, including its reputation and the recruitment of faculty. Success in these areas is vital and it often hinges on kindling relationships.

The Dean’s activities in the media and on their social platforms can initiate and preserve these relationships. Schools that use this opportunity to influence their target audiences, and do it effectively, reap the rewards.

“In order to stand out, it is important to create and promote a strong brand and identity for your school. This brand must then be pushed through multiple channels on a consistent basis in order to get your message across,” said Jonathan Simon, Director of Marketing and Communications at the Telfer School of Management, the University of Ottawa.

“The Dean of the school is an important extension of that brand. By leveraging your Dean’s public profiles to share messages about your school, you will be able to achieve your goal of promoting your key messages but also do it in a way that feels more personal. Today, especially on social media, people want to feel like they are talking to a person and not an institution.”

The words of a Dean carry significance

As they come from an institution’s figurehead, messages from a Dean carry weight. Opportunities to deliver these crisp, clear messages about programmes and future plans are incredibly valuable, especially in today’s climate. Ultimately, external stakeholders go a long way in dictating the financial and reputational welfare of a business school – and these key audiences, including alumni and potential applicants, learn about business schools from the media.

So, understandably, establishing a credible presence in the press and online fosters positive relationships with these key stakeholders. Many Deans are well prepared for this and are adept at public speaking, media appearances, and civic functions. Many also have significant followings on social media.

These Deans have recognised the importance of a leader’s visibility in communicating priorities and agendas to its wider community. They also often have the support of skilled PR and marketing resources to help frame and sustain an integrated and clear communications strategy. That means their messages are aligned across internal communications, media coverage, and owned social.

Let’s look at an example

If a Dean takes the time to talk about how their school is proactively working towards becoming more sustainable – increasing research in this area, producing graduates who are engaged in sustainable pursuits, making improvements to the campus, and so on – this will significantly resonate with potential applicants that are committed to sustainability and the environment. The message carries importance as it comes from the Dean and it can be woven throughout all their communications, from their interviews with journalists to posts on Twitter and LinkedIn.

Sarah Seedsman, Executive Director of Engagement, Insights and Consulting at Media Minds Global, told me just how important this cohesive communications and marketing effort can be, especially on LinkedIn. 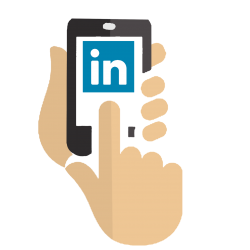 “LinkedIn can effectively supplement other communications channels, from broadcast newsletters to website messages, and add a personal and impactful element to communications,” she said.

But the tide is turning, Sarah says, as an increasing number of Deans are adopting LinkedIn as a key communication channel, recognising its potential.

“In times of crisis particularly, as we’ve seen through the pandemic, audiences value higher visibility of leadership and seek honest and transparent communications which show empathy, care and warmth,” Sarah says. “Trust in social platforms is typically low, but LinkedIn’s positioning and operation as a professional platform see it far more highly trusted than other social platforms.

“Authenticity is key to credibility and trust – even if a school’s communications team are assisting with, or managing the Dean’s social accounts, they must speak in the style and tone the Dean uses in personal interactions and not sound like a duplicate of the carefully crafted and polished copy on a website or in a brochure. That risks undermining the credibility and impact of both the dean and the content of the message.”

Marion Debruyne at Vlerick Business School and Francisco Veloso at Imperial College Business School are two examples of Deans who communicate regularly with their communities on LinkedIn. They are often seen commenting in the media on key topics, as well.

But who are the most followed business school Deans on LinkedIn?

As it stands, Media Minds have identified these as the top 5 Deans with the most followers on LinkedIn –

What’s striking about this in particular is that Erika, whilst at Goizueta, had just 2,043 followers on 15 January this year, according to data from Media Minds. In February she shared news of her move to Wharton and her followers had doubled to 4,610 by the end of March. At the end of June, as she departed Goizueta, she reached just over 7,000 followers. Then she appeared on Good Morning America on her first day at Wharton, in the week of 29 June, and now has over 40,000 followers on LinkedIn.

“Watching the exponential growth of Erika James’ audience has been fascinating and it will be interesting to see what and how she chooses to communicate with this rapidly-growing audience,” Sarah says.

Erika’s post on her first day garnered over 36,800 likes and over 1,700 comments – a much higher level of engagement than business schools or Deans typically achieve. Sharing a video of her appearance that same day on Good Morning America earned over 6,000 likes, 360 comments, and over 150k views of the clip. It’s easy to see how powerful a combined media appearance and social media strategy can be.

The Dean must be seen – in the press and on social

It is becoming increasingly clear that the profile of the Dean, Director, President or Rector Magnificus – however the school refers to its head – has the power to build and maintain their institution’s profile. Goals such as boosting student recruitment, attracting new corporate partners and generally building the school’s brand can soar with the clout and backing of a Dean and their activity on social media and in international press.

Just look at the Dean of ESCP Business School’s London campus, Simon Mercado. In the last month alone, he’s been interviewed in Forbes and Poets&Quants, as well as provided an op-ed for BizEd Magazine, on the current situation and how they plan to tackle it. This has provided clear and reassuring insights for key audiences, including potential applicants in outlets that they’ll definitely be reading. Our metrics estimate that just these three pieces combined reached over 110,000 views.

Right now, business schools face a profoundly challenging environment – from Covid-19 to travel and visa restrictions – they need visibly strong leaders. Today’s challenges require Deans to shape and execute thoughtful responses. Having coherent and effective communications strategies will build credibility among stakeholders and offer schools a brand that it deserves, that it is consistently living up to and trying to cultivate – and it’s about time the world saw that through the words of its leader.