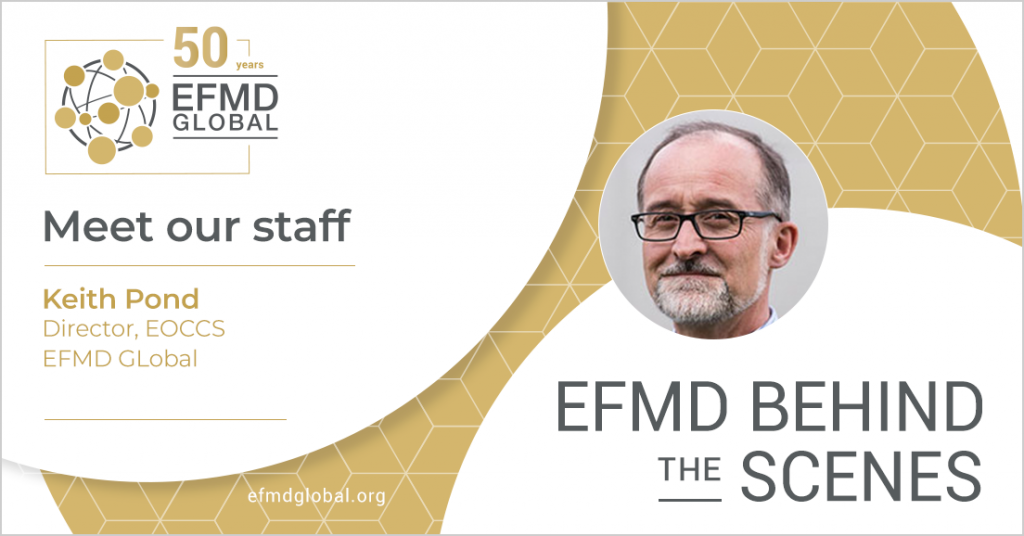 For our 50th Anniversary, EFMD has created a new “Behind the Scenes” series so you can get to know us better. This conversation is with Keith Pond, our EOCCS Director.

Keith, thank you very much for taking the time to talk with me today. Could you, first of all, tell me how long you’ve been involved with EFMD and what you do for the organisation?

Indeed. Well, I think it is lost in the mists of time when I first attended an EFMD event. But the more recent history is when I became a senior manager at my own business school, at Loughborough University. I began to build that relationship and was chosen to speak at the 2014 Annual Conference on the subject of Technology in Learning. And very soon after that, helping to design the EOCCS system. And then launch the EOCCS system. I became director of EOCCS in 2017, and that’s what I’m doing today, helping to build that and grow the community around it.

So, for anyone who doesn’t know, what does EOCCS stand for?

The acronym is the EFMD Global Online Course Certification System. So the keywords there are “online courses”, and that’s our focus.

How would you describe your job to a child?

I think the key thing is sharing. And I help people share things, people and organisations, their experiences, sharing their knowledge, sharing their time. And it’s that networking between them, organising different events such as webinars, our symposium, blog entries, etc., that really help them share their insights and practical tips. And I think that that’s my key role.

And what are you most proud of in the EOCCS Department?

We’re now six years old. We launched in 2016, and we’re looking forward to our sixth birthday. But I think in, you know, degree of maturity, we’ve grown up in COVID. I think so many more institutions have seen the need to grow skills in the area of digital education. So, yes, we’ve got a number of courses, numbers of institutions in our community. But it’s that influence, which is very difficult to measure, that, after six years, we’re most proud of.

And what do you appreciate the most about the EFMD network?

Well, it’s working with peers and experts and with a whole range of commercial organisations interested in developing their products and institutions that teach. One thing I found in common with all of these different people inputting into the area is their willingness to let the world know what they’ve been doing and what they can offer, and how they can help others in similar positions. There is a great deal of openness.

It’s very nice. And what development or innovation do you think is now critical in management education?

Well, probably very predictable that I say so, but it’s digital education and where that fits, because there will still be, in the future, institutions that have the same campus-based face to face tradition. And there will be institutions that are entirely online and never physically meet their students or learners. And the whole range in between. Even for those traditional campus universities, there are a number of digital skills and digital products that they will need to bring into their work. The achievement of strategic goals of accreditation, internationalisation, efficiency and meeting the demands of today’s learners are also things that drive that increase in the digital exposure in our higher education courses.

Can you tell me what you could give a 20-minute presentation on with no preparation?

Oh, come on. I’m a lecturer. I’ve lectured in so many subjects over almost 40 years. Lecturing has been described as “talking in someone else’s sleep”. I could rattle off a good two hours of material in many academic subjects such as business economics, banking strategy, banking law and practice, and insolvency law and practice, which is where I did my PhD. But what I like to talk to people most about at the moment is promoting digital education in business schools around the world, changing mindsets and cultures and business models to gain the advantages of digital. And I could probably do a couple of hours on that without any preparation.

What is something you’ve been meaning to try but haven’t gotten around to?

I’d love to have flown my own plane. I think I’m a bit old for that now, but I’ve had opportunities in the past to take flying lessons, that for one reason or another, just didn’t work out. But, you know, failing eyesight and age mean that, you know, I’m a bit more careful of the risks associated and I may never get around to doing it.

Sure, I understand that. What is your favourite piece of music?

I thought long and hard about this, but I think I go back to a very traditional British composer and some very evocative music, Elgar’s Enigma Variations. There are some very stirring, very British tunes, very common tunes within that. But it’s just majestic.

And I also should ask you, where are you located? Because we have a very global staff.

If you picture the British Isles, United Kingdom and then put a pin right in the middle of England, that’s where Loughborough University is. And that’s where my home has been for the last 30 years. And it is one of the best-connected parts of the world that no one’s ever heard of.

England is beautiful. I’m sure it’s a very nice area.

We do have some lovely parts. We’re very close to the Derbyshire Peak District and not that far, really, an hour and 15 minutes, the fastest train to London. So, really quite close to the seat of power.

It sounds nice. And the last question for you, what is the best advice you have ever received?

Yeah, some context is needed here. I graduated from university and went to work for the next eight years for a major UK bank. In that, I worked myself way up to positions of responsibility, but it was always customers coming at any time on the phone by letter, physically coming, that demanded your attention. And there was never any time to sit back and think about what you were doing or plan for things. I took the opportunity in 1986 to be seconded to Loughborough University to teach banking law and practice. And my professor sat me down on day one and said, look, we’ve got an office for you. It’s been allocated, but nobody’s going to check you in or out. You don’t have to sign in in the mornings or no one’s going to ask you what you’ve been doing. The important thing is to deliver what we ask you to deliver. How you do that, and where you do that really doesn’t matter. That was such valuable advice because I took him at that. The job of teaching and research is fulfilling enough. But I was able to complete an MPhil in 1989 and a PhD following that, and I remember during my PhD. a sort of real light bulb moment coming when I was out walking my dogs.

I think those moments happen pretty often when you’re not expecting them.

And I guess you liked teaching well enough to not go back to banking then. Correct?

Indeed. Even now, with teaching, you really need to think about, you know, what it is you’re doing. It’s so easy to copy what you’ve seen before, what you’ve done before, but you really have to, for your own purpose, look back on your objectives, what is it I’m trying to achieve with this teaching? And that takes a lot of thinking. In the business school world, there is a community of sort of instructional researchers and educational researchers in business. And they are really coming into their own in the world of digital because that needs that theory and concepts behind it.

And what is the next thing on your agenda that you’re looking forward to?

Well, we have the EFMD Annual Conference in Prague that we’re preparing for. So as a Quality Services director within EFMD, we’re preparing our sort of annual exposure to the delegates at that conference. This year, I’m running one of the breakout sessions on the subject of micro-credentials. So, something that we have heard about but don’t really understand perhaps where it fits into the business school environment and hopefully, that panel discussion will help to do that. So, I’m really looking forward to that and getting out of the UK and the lockdown situation for a little while.

Well, Prague is beautiful, so I hope you enjoy coming here. Thank you very much, Keith, for talking with me today.

Learn more about Keith in the video with Eline Loux below.