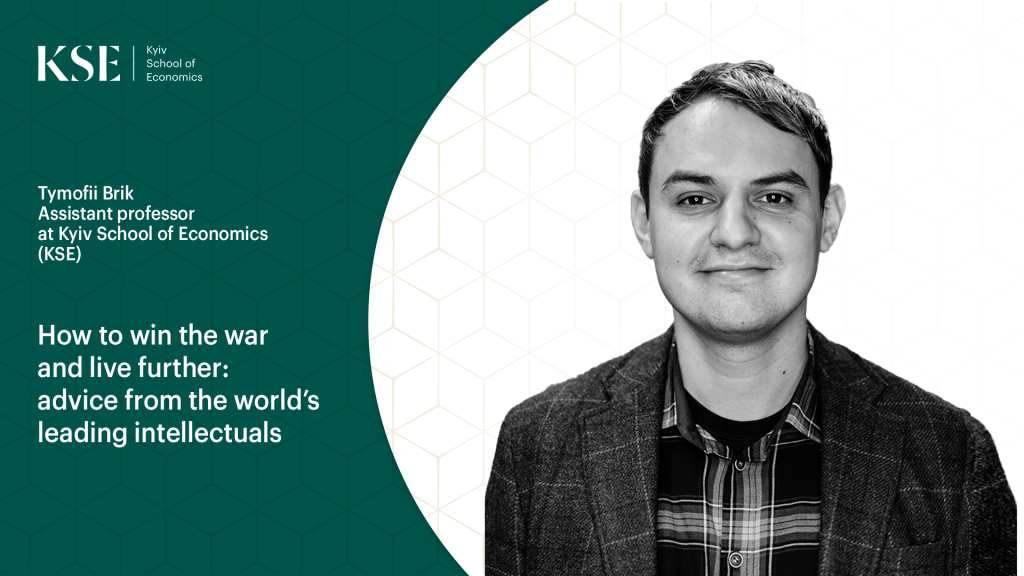 This article is by Tymofii Brik, Assistant professor at Kyiv School of Economics (KSE).

During public lectures at Kyiv School of Economics, my colleagues Tymofiy Mylovanov and Ivan Gomza and I spoke with Nassim Nicholas Taleb, Paul Krugman, Daniel Kahneman and other world’s leading intellectuals about Ukraine and the war.

Why did we decide to arrange public lectures, even though we were in the midst of war?

Unfortunately, even today, when Russian bombs fall on Ukrainian libraries and campuses, the Western world does not look at this war through the eyes of Ukrainians. Ukraine’s perception still depends on what was written by Russian historians, culturologists, and philosophers decades ago. The perception of sanctions and Russians depends on what modern Russian economists and political scientists say. Moreover, hundreds of intellectuals who influence governments and public opinion still depend on Russian narratives. Therefore, there is a salient necessity to create new platforms that would not be affected by this bias.

That is why Ukrainian organisations must become platforms where world intellectuals offer their vision of war and reconstruction of Ukraine. Therefore, together with our partners, we have created a new project Ukrainian Global University (UGU), which aims to help Ukrainian students and struggle for Ukrainian intellectual sovereignty. As part of this struggle, KSE and UGU launched a marathon of lectures with world intellectuals – #GlobalMinds4Ukraine.

We invited the world’s leaders – author of the theory of “fragility”, writer Nasim Nicholas Taleb, Nobel laureate Paul Krugman, former US ambassadors to Russia Michael McFaul and Thomas Pickering, the father of “behavioural economics” Daniel Kahneman, a historian of the Cold War period Mary Elise Sarotte and other “weightlifters” in their areas – to talk about the Russian invasion of Ukraine.

We have listened to more than 15 hours of their lectures and analysed their theses together with our students and volunteers. What have we learned? Here are our key findings.

If you want to win the war, you need:

‘I recognised the limitations in terms of equipment and weapon systems, aircraft, and the rest of that. And the truth is: that can be provided. You can’t provide heart, you can’t provide will, determination, and fortitude. I realised if they [Ukrainian military] can get additional Javelins, Stingers, this is going to be a very formidable military’, said retired US Army General David Petraeus.

‘A war remains what it has always been, which is a test of will. It’s not only about the will of armies but also about the will of people. Regarding that key element, Ukraine is a lot stronger than Russia, said Eliot A. Cohen, an international strategist and head of the Center for Strategic and International Studies.

If you want to revive the economy, you need:

If you want to live a happy future, you need to:

‘Despite the disappointments, Ukrainians must hold on to the values ​​that we all agree are essential for the civilised world. When a leader makes the rules alone and throws his enemies into jail, that is the path to a totalitarian state, in Russia. Ukrainians don’t want to live like that‘, said Andrew McCabe, former FBI Deputy Director (2016-2018).

How to prevent war?

‘I don’t join the optimists among those who characterise the pre-invasion situation as malleable. The decision to invade Ukraine was made a long time ago’, said Thomas Pickering, US Ambassador to Russia.

Putin expected that the 2014 invasion would be devastating enough to sow instability and doubt among your people and leadership about Ukraine’s future. He achieved certain goals, but the Revolution of Dignity was ultimately successful for Ukraine. It contributed to the consolidation of democracy in the European country Ukraine. And that is exactly what Putin is trying to destroy now.

We can add that achieving all these goals (making conclusions from history, building a smart economy, forming strong institutions and strong leaders) is impossible without a base – powerful and independent universities. Education, research, and innovation are the foundation for a strong and responsible society.