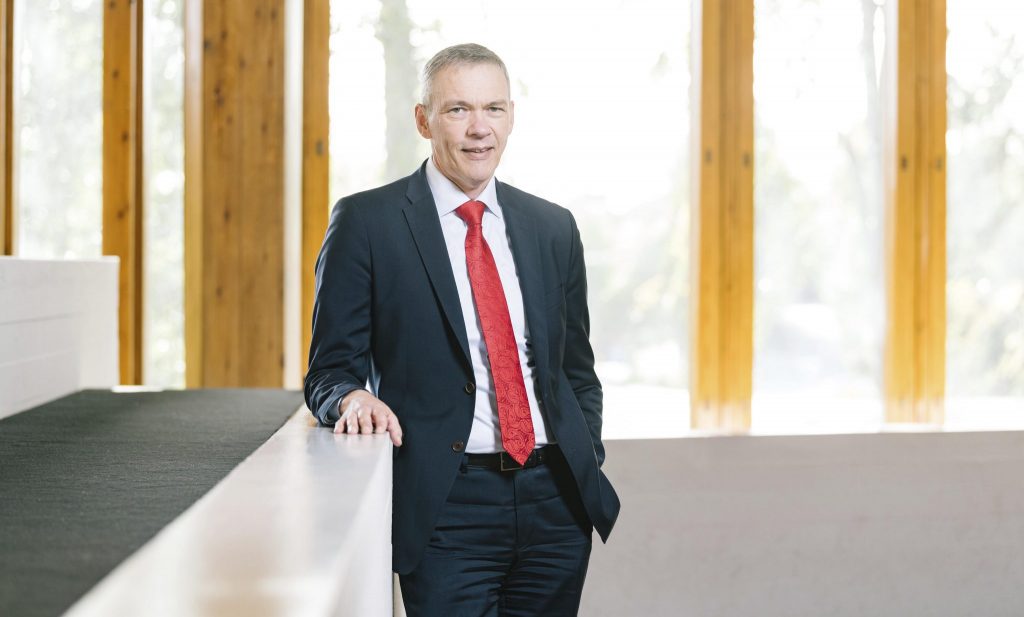 Is Aalto University School of Business one of the world’s most stable business schools amid crisis? Its Dean, Professor Timo Korkeamäki, discusses the school and its future with Stephanie Mullins, Associate Director at specialist business education PR consultancy, BlueSky Education.

“When the pandemic hit in Finland, we pretty much closed our premises in mid-March and stayed closed through the spring semester. But if I looked at only the statistics that track our performance – our research output, our course or degree production – I wouldn’t notice anything at all,” says Korkeamäki, who became Dean at the beginning of this year.

“If I had my eyes covered from news, I wouldn’t know that something weird was going on.”

Yet, like most institutions, the faculty at Aalto were expected to move quickly from lecture theatre to Zoom. Korkeamäki admits that there probably weren’t many points for style at the beginning, but they certainly received points for effort and keeping the ball rolling.

“Now the bar is much higher,” he warns, “because everybody knows this is not a surprise. We’ve now had plenty of time to prepare and take into account different constraints, but I received student evaluations for the first part of the fall and they’re actually better than last year. How can I explain this? Students would tell us if they had problems. There has been a lot of extra effort from our faculty – the incentive really is the wellbeing of students.”

It’s been a learning curve for many, Korkeamäki tells me, and he still feels as though they are working with their hands tied behind their backs. There’s a lot that they’d like to accomplish so the focus remains on making the best of the current situation.

Korkeamäki plans to push the school forwards to becoming even more international – especially in terms of their student body. Aiming to improve gender balance as well as racial diversity, he’s set up a task force to improve diversity of the programmes. I wanted to understand what he thought were the main attractions for potential applicants.

“One of the things that’s a pretty well-kept secret is that Finns speak pretty good English. When I talk to some of the students we’ve had from Far East Asia, they say that, in general, if you’re from China and looking at places to go, they look at Finland saying ‘Oh geez, I need to learn two languages, I need to Finnish and English’ and that’s just not true,” he says.

But when we’re talking about what really attracts students, what intrigued me was how the university was founded – by the merger of Helsinki University of Technology, the Helsinki School of Economics and the University of Art and Design Helsinki in 2010.

“We’re actually under the same roof with the School of Art and Design, and one of the things people talk about a lot in business schools now is design thinking. To have a top art and design school close, with an open door, that’s really a benefit for us.

“Another thing that people talk about in business schools is digitalisation and computer science, and we have one of the top European computer science schools across the street. The way we are set up means our students really have a lot of good things to take advantage of,” he says.

Today is the best time to pursue their goals, Korkeamäki states.

“When it comes to business schools, the big markets are the US and the UK, and they both have their problems right now – geopolitical problems, COVID problems. I think this would be a very good time for us to push the lever a little bit harder and really get on the global map in terms of attractiveness.”

While heavy investment in the Finnish education system means it is widely regarded as one of the best in the world, having that buffer of government funding against the impact of the pandemic must have been even more reassuring this year.

Yet Korkeamäki would like to diversify their sources of funding. As a finance professor, he’s concerned about the pressure that COVID will put on government resources in the future. “While we have been isolated from the market, I know that we will have to face the music at some point, but the future looks bright.

“We need to take full advantage of this window of opportunity that is staring at us. We need to put our best foot forward and speak about all the good things, why would anybody come to Finland? Yes, we’re cold and dark this time of the year, we’re almost next to Siberia, but this is truly a great place.”

Korkeamäki continues to list much more than their strong rankings and multi-disciplinary opportunities on campus.

“We’re in the middle of innovation ecosystems here. The former Nokia headquarters is a couple of kilometres from where I am. There’s a lot of high-tech activity, which has spurred a lot of high tech start-ups of various kinds. We have a very lively gaming industry in Finland, for instance, and I’m sitting about eight kilometres from downtown Helsinki, this is where our campus is. And within our campus, we have a huge start-up centre, so there’s a lot of high-tech activity happening on our campus or within a small circle.”

Despite this impressive environment, he believes that their main selling point is strong faculty. “They’re really top-notch performers. One of our latest rankings was the Shanghai ranking in Business Administration, where we were number 24. So, especially our Finnish stakeholders, they usually start gaping when they see that we’re number 24 and Stanford is number 21.”

Korkeamäki himself worked in the United States between 1995 and 2008 before returning to Finland. He now believes that Aalto University is a pioneer within the country in terms of increasingly moving towards international standards. The school is certainly recruiting faculty on a global scale.

So while we are all concerned with the turmoil of current events and geopolitics, this business school remains consistent and, as a result, many more will be drawn to study in the calming Nordic scenery.