Little more than a month goes by without a new business school league table being released. From the likes of the Financial Times, QS, Forbes, the Economist and America Economia, these rankings breakdown the performance of the world’s top business schools.

While for some it may feel like we’re being perpetually bombarded with new sets of rankings every week – covering a whole host of different categories and making it almost impossible to keep up – business school league tables are a fundamental indicator of a school’s worth, pitting that institution up against its biggest rivals. They are also a major influence on prospective students.

It’s because of this that so many business school communications and PR teams are under such pressure to effectively share rankings news – highlighting successes, and playing down any results that don’t go their way.

With the right approach, ranking results can be one of the most effective ways of attracting the best applicants and faculty to your business school. That’s why it’s so important that institutions get it right, and share their results in the best way.

In order to share ranking results in the right way, there’s a few key things to think about:

Is sending a press release the right course of action?

If an institution has just been informed that they’ve climbed a number of places in this year’s release of the Financial Times’ Global MBA Rankings and, understandably, the Dean and other stakeholders are keen to share the news, an automatic response is often to draft a press release.

But, one thing to consider before drafting and sending that release is whether the rankings news is going to generate the desired interest and engagement.

Journalists receive an abundance of pitches and press releases from PRs and business schools, each looking to share their institution’s rankings news. They’re inundated and overwhelmed by emails all saying very similar things, and so there are a number of better alternatives to consider. For instance, it can often be of more use to reach out to regional press, who are more inclined to take the story of schools that are local to them than institutions on the other side of the globe.

Another thing that some forget to take into account is the underlying reason for the rankings performance: why did the school climb X number of places? Journalists, particularly at national publications, are more interested in trends that explain successful results, which can therefore offer actionable insights to readers.

An example of a school that successfully did this is MIP Politecnico di Milano School of Management. The Italian business school put together a strong press release in order to share its performance in America Economia’s 2020 Global MBA rankings. Alongside revealing its ranking position, the key attributes that secured its position in the Latin American league table were included. In doing this, the school provided the media with relevant insights, which can serve as advice to readers and other business schools, while also acting as selling features for MIP Politecnico di Milano.

However, sometimes a press release isn’t necessarily the right course of action for an institution at all. Business schools shouldn’t forget the value of engaging with their key stakeholders via their own platforms – including social media accounts or their school’s website – for this sort of news.

Identify a school’s strengths to break away from the crowd

Whether a school’s rankings performance is shared through a press release or other means, one thing that every institution should be thinking about is what distinguishes these results. 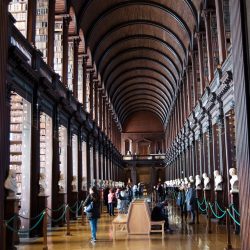 Trinity Business School did just this when they shared their results from The Economist’s 2020 Executive MBA Rankings. Going beyond simply pushing their overall league table position, the Irish business school was keen to highlight its impressive results for gender balance. Achieving 1st and 2nd place in Europe and the world respectively, Trinity put this at the fore when the school shared its news with the wider media. Drafting a release that echoed the school’s success, as well as sharing the news through the school’s website, Trinity’s announcement was picked up in the print edition of the Irish Daily Mirror, alongside a number of other publications.

Alongside this, a similar course of action was taken by Durham University Business School when sharing their results from the Financial Times’ European Business School Ranking 2019. Much like Trinity, Durham were keen to look beyond overall ranking positions, stressing their success in the category dedicated to post-MBA salaries, in which they ranked 1st in Europe and 2nd globally. The business school sent out a press release which was subsequently picked up and quoted in a Poets&Quants article around the wider rankings results.

In both instances, through successfully identifying and emphasising the key strengths in their rankings performances, even if these strengths were only in specific categories, Trinity and Durham achieved a wide degree of engagement from the media, which can make all the difference when it comes to admissions.

When engaging, make sure it’s consistent

When engaging with the media around recent rankings results, some have to be prepared for the possibility that just as easily as things can go up, they can come right back down.

We still suggest that a school should undoubtedly make the most of any and every successful showing in a business school league table, but it’s consistent rankings that secure credibility and a good relationship with the publication responsible for the rankings. On the occasion that a school doesn’t achieve the result it’s hoping for, identifying strengths in an institution’s performance and then highlighting those strengths on social media platforms and via the school website will enable brands to avoid inconsistencies in an approach to rankings.

When it comes to business school rankings, it’s really all about how an institution chooses to share the news. While a press release may seem like the obvious, and desirable option, there’s value in utilising owned platforms, particularly if the rankings don’t go the preferred way or they simply aren’t striking enough for national or international media. However, for those that do choose to engage the media, think about why the school achieved the result it did, and look for the strengths in performance that will distinguish the press release from the rest.

Ultimately, in such a competitive market for business schools trying to recruit students – as discussed in the rankings episode of the BlueSky Education Thinking podcast – if rankings matter to prospective students, then they matter to business schools to help attract those students, and communicating around them effectively is crucial.