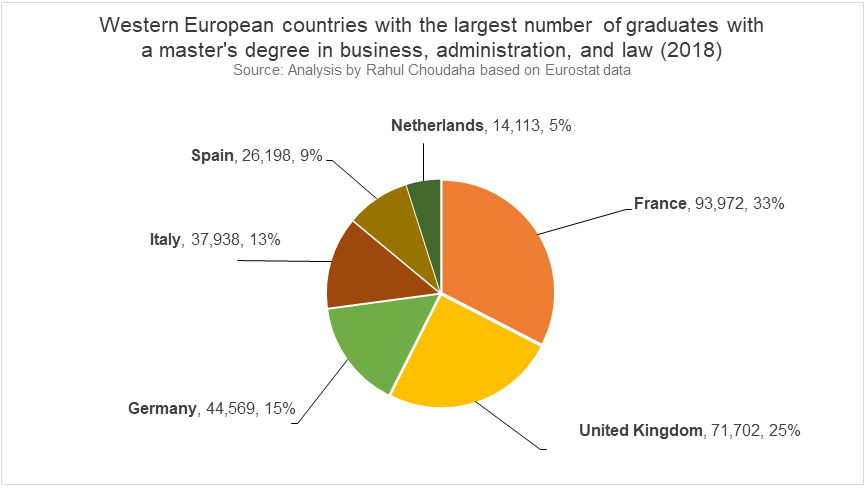 2019 marked the 20th Anniversary of the Bologna Declaration, which has been transformative in increasing compatibility and comparability of the systems of higher education in Europe and accelerating the mobility of learners. As the Bologna process was unfolding and streamlining various structural and qualitative dimensions, the master’s degree was also growing in its popularity. For example, the number of master’s degree graduates in France increased from 189,603 in 2005 to 298,930 in 2018, according to Eurostat.

Master’s degrees in Europe also gained momentum with the launch of English-taught programmes. OECD noted in its 2012 report, “…an increasing number of institutions in non-English-speaking countries now offer courses in English to overcome their linguistic disadvantage in attracting foreign students.”

This evolution of master’s programmes intersected with the changing nature of the global economy and national policies, which established business and management as one of the most preferred fields of study. According to Eurostat, 1,667,134 students graduated with a master’s level degree in 2018 in the EU 28 countries (including the United Kingdom).  One out of four graduates with a master’s level degree was in the field of “business, administration, and law”—making it the leading field of study among ten broad categories.

However, the accelerated growth of master’s degrees in business and management also created a need to define and distinguish different purposes of the programmes such as the academic master’s and the professional master’s. The European University Association quoted EFMD for defining master’s programmes in business and management in three segments: “the MBA, which will now benefit from official recognition as a national degree in most countries; the generalist Master in Management; and the specialised MSc programmes.”

At the country-level, we notice that six countries in Western Europe drove the bulk of the demand for master’s degrees in business and management. This demand is mirrored in the economic scale of these countries, amounting to a GDP of nearly US$ 14 trillion in 2018, according to IMF. According to Eurostat, more than 68 percent of 425,951 graduates in business, administration, and law in the EU 28 countries were from France, the United Kingdom, Germany, Italy, Spain, and the Netherlands.

While the UK had been an attractive destination for international students for a long time, the other five countries in continental Europe emerged as contenders of not only attracting mobile students from within Europe and also from outside the continent. This increase in attractiveness of Western Europe among prospective master’s level students in business and management is also evident from the GMAT™ test-takers data. It shows that the proportion of non-Western European prospective students sending score reports to Western European business schools increased from 11.7 percent in a testing year (TY) 2011 to 17.1 percentage in TY 2019 (testing year runs from 1 July 2018 to 30 June 2019).

In sum, two decades of the Bologna process has made an outsized impact in shaping learner mobility within Europe and from overseas. In specific, master’s level programs in business and management gained traction in the context of globalization and Bologna reform. However, the onset of the COVID-19 pandemic has resulted in a widespread impact on the lives and livelihoods of people around the world, and business schools are not immune to it. As Steve Brammer, Dean of the School of Management at the University of Bath and Timothy Clark, Provost of Singapore Management University assert, “The fundamental economics and geography of HE [higher education] are being challenged by COVID‐19.”

In this new context of COVID-19, how are European business schools likely to fare in their ability to attract and enroll students in master’s programmes? How is COVID-19 shifting the choice preferences of prospective students? In the next blog, I will share highlights of the impact of the Coronavirus on candidates considering master’s level programmes in business and management.

Dr. Rahul Choudaha is Director of Industry Insights & Research Communications at GMAC in the Washington DC area. As a subject-matter expert on mobility trends, student choices, and enrolment strategies, he evangelizes trends and insights related to global graduate management education and careers on the foundations of research and intelligence. He has presented more than 150 sessions at professional conferences and has been quoted over 300 times in global publications. Follow him on LinkedIn and Twitter.