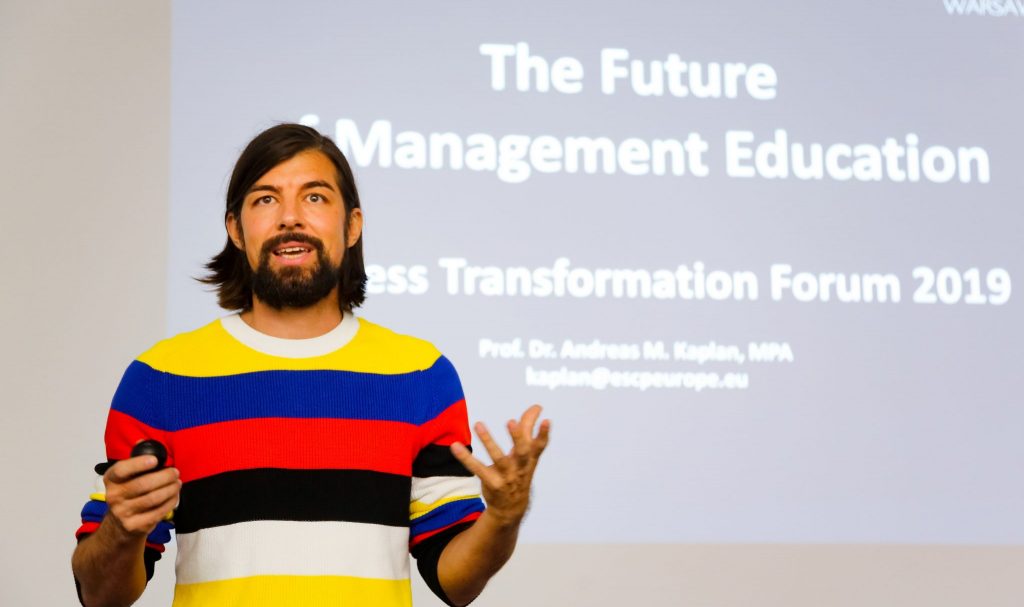 About EdTech’s potential take-over of the higher education sector

In 2012, the New York Times proclaimed the year of the MOOC, stating that online courses delivered on platforms such as Coursera and Udacity would disrupt the higher education sector. Universities and business schools worldwide pointed to the fact that studying is far more than listening to theoretical content and referred to other activities like networking, certification, career service, and social activities.

Indeed, nobody stated that MOOCs could replace these aspects – but nobody said that they are not replaceable by other means either. This is where edtech (educational technology) kicks in, defined as the application of technological resources and processes for learning and teaching purposes. Considering the acceleration of higher education’s digital transformation due to the Covid-19 crisis, this article sheds light on the edtech scene analyzing how universities might avoid disruption.

Universities are teaching experts – Yes, but…

Several examples exist where edtech helps to improve teaching. For example, Jill Watson, a virtual teaching assistant, responded so perfectly to Georgia Tech students that they did not even notice they were talking to a machine. The time freed-up by Jill Watson was then used for more value-adding activities by faculty and staff. In the case of adaptive learning, edtech also has the potential to improve teaching directly: AI (artificial intelligence)-based online tools help to adapt the speed and level of teaching depending on a student’s progress. Such data also referred to as “learning analytics,” can help professors to adjust even their offline teaching.

Edtech doubtlessly can improve the teaching and learning experience. Nevertheless, it will still have a hard time to replace universities as real teaching experts. However, this only holds if universities stay experts in teaching. Higher education increasingly puts more weight on research with regards to a professor’s assessment and career progression. Research output is objectively measurable while teaching is often evaluated by student evaluations, which are not necessarily objective. Edtech could potentially change this since, theoretically, one could analyze the link between course participation and the increase in specific skills demanded by employers. Course quality would become more transparent, likely shifting weight back from research to pedagogy. Such transparency could objectivize universities’ teaching expertise. As a consequence, universities might need to refocus on their core: teaching and pedagogy.

Universities are preparing for the job – Yes, but…

Universities help students find their future jobs. Especially business schools justify their (increasing) program fees by promising students competent career advice. Recently, however, universities started to outsource this value proposition to edtech start-ups such as JobTeaser, Jobs2Careers or the EFMD Virtual Career Fairs by Highered, which provide career service to students, often free of charge. Based on their profiles, students are matched with potential employers. Since these platforms count several universities and employers amongst their clients, significant networking effects exist.

Edtech replaces universities in this aspect. This might be problematic since alumni often are most thankful for having found their dream job thanks to their alma mater. In case they relate this success not to university, but to the edtech platform, who will they thank in the future? Attached and thankful alumni might become donators later on. It might, therefore, be unwise to externalize such high-value services. The least, universities should come up with ways where their career service complements the one outsourced to edtech platforms.

Universities are accredited to deliver diplomas – Yes, but…

Universities often pride themselves on being the sole provider of official degrees as well as the owner of prestigious labels from various national and international accreditation bodies. However, accreditation bodies are searching for additional funding and new markets, too. Additionally, official degrees are also an option for non-university institutions. Look at the Code University, for example, which obtained the right to deliver state-accredited degrees by the German State only a few years after its opening.

The highest validation of a university, however, comes from the job market itself. Currently, employers prefer to hire pre-selected students from specific universities, which display a certain profile and set of competencies. What if an edtech company were able to pre-select students, too? Data is often proclaimed as the new oil and edtech companies often have lots of data. The aforementioned career-service platforms know which courses a student took, as well as their GPA and extracurricular activities. This enables them to potentially find the perfect student/employer match. It might only be a question of time until employers make abstraction of a state-accredited, official diploma.

Universities are providers of networks and friends – Yes, but…

Often the best experiences made at university turn around having found valuable contacts, friends, or, in some cases, a partner for life. These memories strongly influence students’ attachment to their alma mater, which, as previously explained, is vital to any higher education institution. The Internet, however, provides more and more ways to nurse one’s network or to find friends (and partners) outside of the university. LinkedIn became the biggest competitor of any alumni association, and Facebook, Tinder, and Co. help with the aspect of creating friendships (and more). Recently, also specific higher education start-ups entered the university’s socializing perimeter.

Although the virtual sphere increasingly helps with finding friends, authentic companionship is still made more easily in real life. Those friendships usually are made outside the classrooms during breaks and after classes. In consequence, universities should foster socializing and help to make memorable experiences by organizing exceptional events, supporting sports and student associations, providing study trips as well as social events, and alike. Alumni associations need to find ways of competing against LinkedIn. This can be done, for example, through the provision of exclusive job offers within the alumni network, top-notch coaching sessions for one’s professional career, or high-quality networking events.

Universities are long-standing brands – Yes, but…

Universities do have strong brands and long-standing traditions. Who would not want to have Harvard, Oxford, or Stanford on their CV? However, a strong brand might no longer be sufficient in the medium to long term. Also, companies such as Coca-Cola or GE were surprised when the brand equity of Apple, Google, or Amazon overtook them in value. While in the past strategy consultancies counted among students’ preferred employers, this increasingly shifted toward the tech giants.

New entrants jump into the higher education market and rapidly gain in brand value. Examples include the Code University, Ecole42, and alike. Creativity and innovation pay off with employers increasingly attracted by graduates from these newly established players which rapidly expand their alumni networks. Additionally, peer pressure, as well as parental control with regards to university choice, has been in decline for several years now. Employability and networking, as explained above, are both aspects under pressure from edtech start-ups, which shows that university brands are not one-dimensional but a collection of several elements.

Universities are hubs providing all of the above – Yes, but…

A (last) argument often brought forward for universities who are resistant to disruption is that they represent hubs combining all of the above: teaching, networking, corporate relations, certification, and prestige. This is doubtlessly true, but digital transformation usually does not take over a sector in one single maneuver but rather piece-by-piece. Look at the music industry, which was not conquered at once. Napster took on the role of content provider. MySpace enabled fans to get close to their stars. A record label’s A&R division was taken over by crowdfunding sites such as Kickstarter.

To avoid their step-wise dismantling, universities need to work on the aspects outlined above. However, they also need to strengthen their value proposition and the communication of it. Currently, it seems that not even a university’s top management is always at ease explaining their institution’s value proposition. This makes it easy for start-ups to take one aspect at a time, gradually improving it, potentially making long-standing universities obsolete.

Yes, and… instead of Yes, but…

It is frightening that since the University of Bologna opened its doors in 1088, not a lot has changed concerning teaching. Professors lecture in front of students who take notes to succeed exams to graduate eventually. Universities are at the forefront of innovation and research in nearly all fields, but they seem to fail within their sector. Higher education is highly resistant to change and extremely risk-averse. To not take on the challenge of the sector’s digitalization with edtech start-ups increasingly entering the battlefield would, however, be the high-risk strategy. It is time for a Yes, and… instead of a Yes, but…

Change is in the air with venture capitalists massively investing and several of the brightest professors themselves moving into edtech companies, which represents a strong indicator for the sector’s likely disruption. As long as university presidents and rectors spend most of their time coping with business-as-usual not being able to radically going new ways, they might not be wrong after all.

About the author: With over ten years of leadership experience in higher education, Professor Kaplan currently serves as Dean and Rector of ESCP Business School Berlin. Particularly interested in the future of business schools and the general higher education landscape, Andreas Kaplan has written several articles treating the sector’s digital transformation due to the arrival of MOOCs, SPOCs, edtech (educational technology), and artificial intelligence (AI). Professor Kaplan has been counted among the worldwide top 50 business and management authors according to John Wiley & Sons.