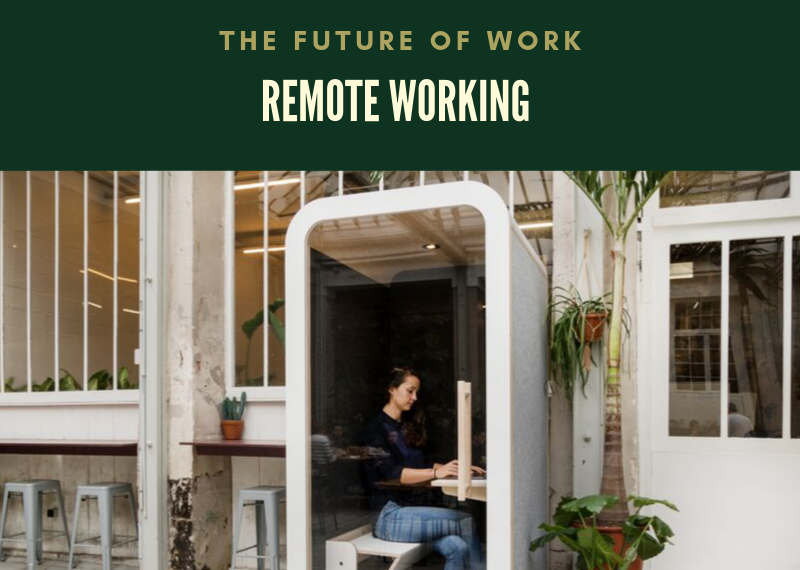 I started to work on a remote team in 2011. My boss, the project manager, just moved back to the US. Great, I thought. The first project manager quit to follow his partner to the UK. The second one moves to the other side of the world, leaving me –  a junior researcher – to liaison between her and the other team members spread across different buildings in the city.

Since I started my professional career I had to deal with physical distance from my supervisor. This was a great experience. I quickly learned to stand on my feet, manage time zones, communicate clearly, work flexible, and reach out to strangers for help. But it wasn’t easy. It took time to learn when the vast sea of anonymous help on the internet wasn’t sufficient. The active learning method I was exposed to during my business education has contributed to my success in working on remote teams.

Telecommuting, working-from-home or in some other way being removed from the oversight of a manager is not  a new phenomen. Just think about how long distance education in some form or another exist. Currently, remote work and hence remote companies, such as Gitlab, Buffer, Zappier, or Automatic, are in a greater spotlight thanks to technological advances and software products. These make it easier to work while being physically removed from colleagues and supervisors. However, they also create the illusion that a program can fix problems between people.

Unfortunately, there is no consensus on the definition of remote employee. For example, Gallup defines remote employees as “any employee who spends at least some of their time working in a location away from their manager or coworkers […]. This definition also includes employees in industries such as transportation and construction.” However, the current conversation of remote employees is driven by software developer, digital marketers, communication strategist, data analyst etc. The definition most often used seems to be that a remote worker is someone who can take their work where ever they want, and hence is not bound to work in a certain location.

While remote work is certainly stronger in the US, Europe also has a number of successful remote companies, such as Scrapinghub or Hotjar. For Business Schools it is important to understand how advanced the remote working trend is in Europe to decide if and how to prepare its graduates for this work environment.

In 2017, around 5% of working-age people (15 to 64) worked from home. Eurostat reported that the highest percentage of home-workers were in the Netherlands (13.7%). The European average is 5%. Gender and age also play a role: Women and older employees (above 25 years) are more likely to work from home. Of course, most people who work from home are self-employeed (18.1%) compared to employees (2%). What is most important is that over the years, more people are working from home: A modest increase of 0.4% across the European Union.

The European Political Strategy Centre conducted a study on the Future of Work. Data collected in 2002 and 2014 show a rise in alternative working arrangements. This does not necessarily mean remote work, but it demonstrates a move away from the traditional 9 to 5 job: Alternative work arrangements include self-employment, part-timers and those in temporary work contracts.

Regarding alternative work arrangement, the report notes: “‘Non-standard’ work, in its numerous varieties, may offer greater flexibility and autonomy” (p. 3). At the same time, it does tend to be paid less than the full-time equivalent and is associated with less access to training. This is an important message for Business Schools as it points to an opportunity for them to provide this training, or at least an obligation to teach graduates how to develop themselves and be responsible for one’s career. Business Schools already provide a chance for graduates to build their social capital, the network of relationships you have, however, might not do this in an intentional way to support someone’s career ambitions.

The skills you need as a remote worker

I have been working on several educational innovation projects and it is mind-blowing how often the mantra of skills over knowledge is repeated but not acted upon with the same energy. Looking at the figure below, it is clear that for many jobs, social and math skills required have changed. For example, management analyst requires nowadays far more social skills and math skills than in 1980. 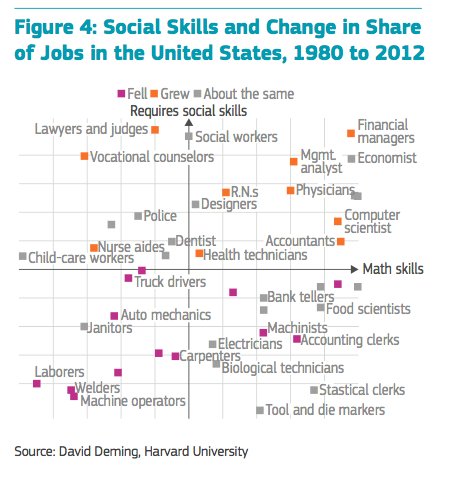 Discussion with remote work advocates, remote workers or talks at conferences, such as Grow Remote,
highlight two aspects which increase the success of remote working: Organisational culture and communication. Organisational culture becomes truly strategically important as a tool to create cohesive teams. This leads to an increasing role of HR in strategic discussion and projects, resulting in Business Schools having to adapt their HR curriculua to fit this industry requirement.
The ability to clearly articulate and to know when to talk with whom drives performance. If a team is spread not only across time zones, but also across ethnic cultures, the ability to clearly express a message during the only time window your team has, is necessary for success. Educational companies such as Workplaceless and remote-how are teaching the skills that are crucial for remote workers, using practical examples and guest speakers who daily work in a remote environment.

But what does this discussion on skills mean for remote work? First, remote work is not for everyone. As a member of several remote work communities, I have read the question ‘What do I need to do to become a remote worker’ quite often. People overlook the skills necessary to do the work and focus on travelling and being your own boss. But they don’t consider how difficult it is to be your own boss.

Nobody kicks you out of bed, motivates you to work, or sets your deadlines. Remote work requires the ability to work independently, to be disciplined. You need to be able to deal with loneliness, motivate yourself to do boring tasks, deal with time zone issues, and team members from other cultures who act and talk weird. These examples refer to soft skills or mindset and talent in the figure below. These need to be included if a program is to prepare graduates for the future of work. 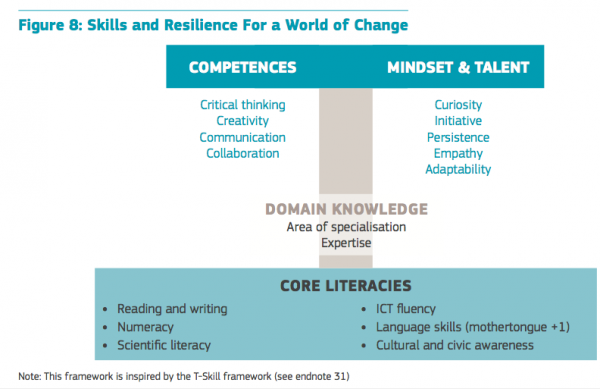 Figure 2: Skills and Resilience for a World of Change Source: European Political Strategy Centre: The Future of Work

Most Business Schools already provide some learning opportunities which would help graduates succeed in a remote work environment. However, often the emphasis is on content and not skills. In addition, conflict between team members does not arise or is brushed, too much hand-holding limits graduates ability to take responsibility for their learning and hence their professional development.

The most basic aspect that needs to be in place for people to work from home is internet connectivity. Consider the following map of broadband access across Europe. 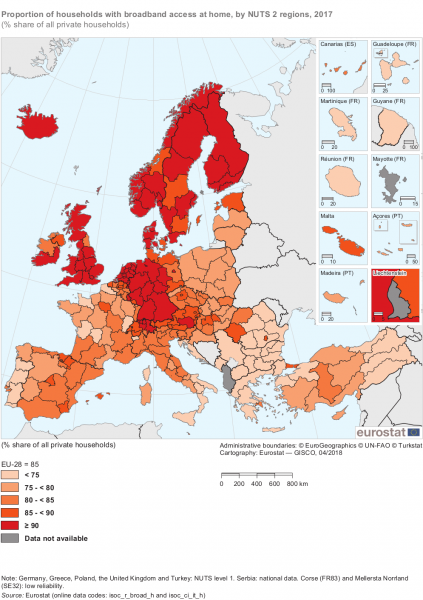 If you compare this map with the above statistics about the percentage of people working from home, it is no surprise why countries like the Netherlands, Luxembourg and Finland top the chart: People have access to the necessary infrastructure for working from home.

Let’s focus on Ireland. Part of the country has high internet penetration while in other parts it is low. Paul Hayes wrote recently about the potential for rural Ireland to ‘Think global, live local’. He lists ways rural Ireland can benefit from technology but ends his article with: “And if we want all regions to benefit, we have to make serious inroads on the provision of broadband.” The work done on Arranmore, an Island of the north coast of Ireland, is a testimony how internet connectivity creates opportunities in remote and removed regions of a country. Business Schools should be engaged in this process of rejuvenating rural areas by giving people the skills to work remotely from small villages, be it as employees or entrepreneurs.

Why Business Schools should participate in the remote work discussion

Without proper connection, there is no need for governments to extend efforts to revitalise rural regions, be it in Ireland or other countries. If people can not work from home and have to deal with long commutes, rural regions will remain a magical and tranquil place, but not a viable alternative for people to live in. This has further consequences on the development of urban regions, work-life balance, and social inequalities.

While companies and individuals claim that remote working has moved from trend to industry standard, a lot still needs to happen for the trend to be established across countries and not just in big cities. We do not need more technology hubs or remote working hubs. We need to consider how the benefits of the future of work can be spread across countries and people. We need Business Schools to join the discussion to equip graduates with the skills to work remotely, to teach future managers how to lead remote teams, and to raise the awareness that is a viable work environment.

Katerina Bohle Carbonell is a postdoctoral Fellow at National University Ireland, Galway and Founder of NetNigma. She leads the Galway Grow Remote chapter, and regularly contributes to the Future of Work discussion on social media. She led the efforts of Futurizing Business Schools, presented at the 2018 EFMD Annual Conference in Copenhagen.