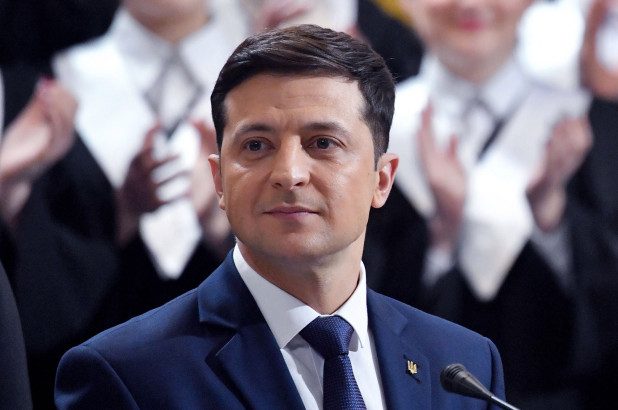 Now that the dust has settled on the Ukrainian presidential election, it is perhaps worth reflecting on what the outcome tells us about modern political leadership. It is also worth speculating on what this might mean for ‘authentic’ leadership more generally.

Servant of the People

The eventual winner of the presidential election, after a second-round run-off, was Volodymyr Zelensky. He is better known as the star of a popular satirical TV comedy show in the Ukraine entitled Servant of the People. In it, Mr Zelensky plays a teacher who accidentally becomes president after an expletive-laden rant about Ukrainian politics goes viral on social media. The show began airing three years ago and clearly struck a chord with the Ukrainian people, for whom a political scene dominated by money and powerful oligarchs have long been a reality. In the real presidential election, his campaign was little more substantive. There were no official rallies or passionate political speeches – instead, his extensive use of social media brought forth a number of cheerful videos portraying him as a likeable, fun guy.

As well as the unconventional format of his ‘campaigning’, the content of Zelensky’s message – such as it was – is also unusual. He made a virtue of his political ignorance and openly admitted to having no strong political views. Whilst he made vague commitments to, for example, ‘stop the shooting’ in eastern Ukraine, he gave no detail as to how he would go about achieving this. Overall seemed happy to stick to a slogan of ‘no promises, no disappointment’. Following an inconclusive first round ballot – hardly surprising with 39 candidates, 21 of them standing independently of recognised political parties – the second round run-off on 21st April was between Mr Zelensky and chocolate magnate and present incumbent Petro Poroshenko. Disillusioned with the established political leadership of the past, Zelensky’s 73% to 24% (see footnote) victory over his rival suggests that the electorate are attracted to the idea of ‘no promises, no disappointment’ too!

But what does all this mean for what counts as political leadership in the current world order? And how does it inform our understanding of what it means for a leader – political or otherwise – to be considered ‘authentic’? It appears that Zelensky was elected not for the substance of what he stands for but for his honesty about not standing for anything. This absence was perceived by voters as more authentic than the broken promises of the political establishment to which it was offered up as the antidote. But if being ‘authentic’ is no more than the absence of commitments that can subsequently be broken, then where is the actual leadership in what modern politics has to offer? More fundamentally, there is also the question of whether authenticity is even possible in the ‘fake news’ world of today? A world where everyone’s opinion is ‘true’ and each new ‘truth’ is quickly superseded by another. In the context of this post-truth relativism, there is a paradox between our increasing desire for authenticity and the shallowness of current ideas of what it might mean to actually be authentic. During the 2015 UK Labour Party leadership election, rank outsider Jeremy Corbyn was singled out by the British press as an exemplar of ‘authentic leadership’ (Iszatt-White et al, 2018). But few remember that now as he is condemned by his own party for participating in cross-party talks to end the current Brexit deadlock (Evening Standard, 10/5/19). The shallowness of modern leader ‘authenticity’ is, perhaps, best exemplified by the leadership-via-tweeting of Donald Trump. One has to question the depth and nuance of a political platform that can be delivered in a mere 280 characters, and where the author is under no obligation to listen to any responses or to retain a consistent stance.

Taken together, these examples suggest there are worrying times ahead for voters/followers seeking authenticity from their leaders. It would seem that both we (as followers) and they (as leaders) need to establish what we want leaders to be authentic to before we can actually hold them accountable to it.

Iszatt-White, M, Whittle, A, Gadelshina, G and Mueller, F (accepted 07/03/18) The ‘Corbyn phenomenon’: Media representations of authentic leadership and the discourse of ethics versus effectiveness. Journal of Business Ethics

Footnote: The remaining 3% were accounted for by spoiled ballot papers or were yet to be counted/confirmed at the time of publication.