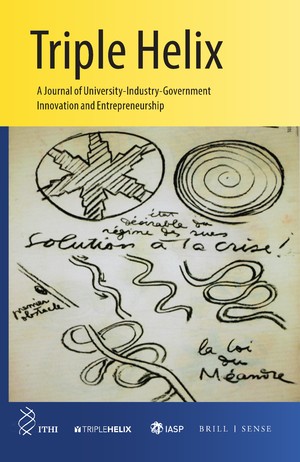 Deadline for extended abstracts: May 31st 2019

New perspectives towards Triple Helix innovation and entrepreneurship phenomenon are sought, from the array of relevant disciplines and inter-disciplines, across different levels of analysis – from micro to meso to macro-, spanning the range of policy orientations.
The Triple Helix of University-Industry-Government relations provides a model for analysing the transitions from a statist command economy or a market (industrial) economy to a knowledge-based society (Etzkowitz, 1996; Ivanova and Leydesdorff, 2014; Etzkowitz and Zhou, 2018), where the role of an entrepreneurial university in innovation is increasingly salient (Etzkowitz, 1983). Originally focused on renewing declining industrial regions (Etzkowitz, 2002), then on creating new regional innovation ecosystems (Etzkowitz, Pique and Mirabel, 2018). Triple Helix both rose to support national and multinational initiatives, and lowered to strengthen micro-foundations Linton, 2018). The Triple Helix model was also taken beyond the knowledge-based realm of Clusters and Techno-poles and applied to solve social inequalities and foster arts/design innovation (Etzkowitz, 2014).
A Triple Helix configuration can be considered as a collective entrepreneur, principal agent, facilitator and enabler of knowledge creation, technology transfer and firm formation (Leydesdorff, 2005; Bresnitz, and Etzkowitz, 2016). Moreover, it is a universal innovation and entrepreneurship model that incorporates other relevant models (National Innovation Systems, Open Innovation, Mode 2 in its capacious framework (Etzkowitz and Leydesdorff, 2000; Leydesdorff, 2000)). Transcending “learning by doing” and other forms of incremental innovation (Lundvall, 2000; Rosenberg, 1982), discontinuous innovation relies on academic knowledge as a structural element and source for innovation in knowledge-based societies (Cooke and Leydesdorff, 2006; Schumpeter, 1911). The sources of innovation and entrepreneurship, in turn, do not reside exclusively inside firms (Fusfeld, 1994), but are commonly found in the interstices between firms (Chesbrough, 2003); firms and universities (Powell, 1990) as well as government (Etzkowitz, Gulbrandsen and Levitt, 2000.)
Various versions of the Triple Helix model have been identified, emphasizing top-down, bottom-up or lateral initiatives as well as some combination of those. Originally focused primarily on economic development, the Triple Helix model has been extended to environmental and social sustainability (Zhou and Etzkowitz, 2006) and tasked to develop a “triple helix ethics” (Etzkowitz, 2011). Civil society is posited as the framework of an optimum Triple Helix configuration, but constricted and hidden civil societies have also been identified as conducive to innovation under totalitarian conditions (Solzhenitsyn, 1968). In authoritarian societies where “bottom-up” initiatives are considered a threat to public order and lateral interactions, without top-down approval are interdicted, entrepreneurial arrangements among trusted peers appear in order to get things done. In such circumstances, the innovative discourse may have to be hidden in circumlocutions of speech, distributed via “samizdat” and obscured in “we chats” that “read between the lines” (Strauss, 1968).
Triple Helix is an increasingly widespread academic, policy and practice discourse but it has also achieved a broader reach as a shorthand kleenex-like emblem for public/private/academic movements, delinked from theoretical provenance (Gebhardt and Etzkowitz, 2019). Re-establishing ties between implicit and explicit helical innovation is an opportunity for academic analysts and practitioners to enhance each other’s work and open up new areas for collaboration. The Triple Helix is not just a model but a venue, virtual and physical, periodically providing a meeting place for scholars, professionals, and policy-makers who address the transition to a knowledge-based economy and society (Granovetter, 2017) from a variety of development perspectives and at different geo-technic levels, but with a common interest in making the discussion informed by empirical research, methodological rigour and theoretical perspicacity (cf: www.triplehelixassociation.org).
Triple Helix theorizing has not claimed a general theory of societal development, nevertheless, it has potential as such through the development of a methodology for social change, transcending Capitalism and Socialism. Studying the dynamics and evolution of the Triple Helix relations provides the scientific landscape with the new dimensions and variables responsible for the emergence of the knowledge-based system (Leydesdorff et al., 2019) – e. g. the redundancy emerging from the Triple Helix actors sharing knowledge with each other and creating a space for discourse around their different perspectives towards same events. Triple Helix futurists are charged to explore the potential of Triple Helix theory and practice for Social Justice, conceptually, via philosophical thought experiments, quantitatively through computer-based AI simulations (Carayannis et al., 2016), offering new measurements and analysing inter-organizational structural and institutional configurations (Leydesdorff and Ivanova, 2016) as well as through traditional political economic argumentation and analysis (Burgos-Mascarell et al., 2016).
Celebrating more than three decades of Triple Helix (Etzkowitz, 1993, Etzkowitz and Leydesdorff, 1995), this special issue aims to inspire new questions, discoveries, visions and aspirations for the future of this field. This special issue is a forum for all who are interested in Triple Helix aiming to gather the best examples of empirical studies and theoretical reflections that showcase originality, new thinking, views, contexts, data and methods about the phenomenon. We are also interested in works that develop new conceptual frameworks, integrate other theoretical fields across innovation and knowledge management related domains and reflect on those with empirical data and fresh observations. Articles investigating individual innovation initiators (III), regional innovation organizers (RIO), as well as innovation modalities powered by intermediaries such as Science Parks, incubators, accelerators, and technology transfer offices (Peters and Etzkowitz, 1998) and novel sources beyond the classic Triple Helix, are also most welcome.

Possible questions addressed by the contributions include, but are not limited to:

Submission instructions
Deadline for extended abstracts (1000-1500 words): May 31st 2019
Contributions invited from PhD students and recent graduates (2 to 3 years after degree award), as well as non-PhD professionals who’s interested in making a scientific contribution and may like to join a PhD programme in the future. We are interested in all topics related to Triple Helix innovation and entrepreneurship.
Papers already accepted for the XVI Triple Helix Conference, Manchester and for the II International Triple Helix Summit, Dubai are considered to have passed the first level of desk review and will be sent for THJ double blind peer review immediately.
Submit through Brill Editorial Manager system.

New submissions should go into the Brill Editorial Manager system with a copy to the Topical Collection Guest Editors:   Ekaterina.Albats@lut.fi   outamha.rabii@gmail.com   Henry.etzkowitz@triplehelix.net

Best papers’ authors, after the subscription of the THA student membership fee (30/60€ per year), can receive the APC fee waiver from the THA, if the related cost will not be covered by the respective institutions which authors are affiliated to.

Etzkowitz, H. 2011, Normative Change in Science and the Birth of the Triple Helix Social Science Information, Vol.50 No 3&4,

Lundvall, B.-A., 2000. The learning economy: some implications for the knowledge base of health and education systems, in: Knowledge Management in the Learning Society. OECD Publishing, p. 260.