Call it Silk road, OBOR (One Belt, One Road) or New silk roads, this project of a new world shaped by the Chinese is colossal, unbelievable, fascinating, beyond reality, almost fictional, megalomaniac…There are not enough words to describe these new “silk roads”. Whatever the opinions – positive or negative – about this project, it will have a deep impact on the world and on higher-education.


It would be a grave mistake to ignore this project and not take it into account in any given strategy, especially as Chinese universities are going to develop initiatives in the cities and countries along these routes, all the way to Africa. The dynamic will allow these institutions to federate and structure different systems of higher-education. It’s all in the works already with the « Alliance of Silk Road Business Schools » of which Brest Business School (which has a Chinese shareholder) and Skema are members.

What are the new silk roads?

They aim to establish a large number of connections, by road, water and rail, between China and Europe, through Central Asia. Beyond these infrastructures, they offer an oriented – even hegemonic – vision of the world with the ambition to structure China’s current thinking and discourse. It would give the country a growing influence on parts of the world, that we have so far neglected.

Although, the big innovative cities of the Western world will maintain their power, the influential tendency towards these new routes will attract investments and therefore businesses and, of course the need for new skills. It will thus appeal to students, first and foremost, business school students. Some of the lesser known business schools may even take the opportunity to become, by capillary action, key actors thus confirming, as I have often mentioned, the sway towards Asia, China, and Central Asia.

This project includes connections with Africa, to its Eastern seaboard, right up to Morocco. And the Chinese-Pakistani economic corridor, connecting the Chinese city of Kachgar to the port of Gwadar, is also in the project. According to CNN, the scheme concerns 68 countries, representing 4,4 billion people and 62% of the world’s GDP (1). The project is going to shape tomorrow’s world, even though many uncertainties subsist regarding the funding of it.

As a business school, we cannot afford not to take part in this development. Several actions can be envisaged:

1- To incorporate it in our training and programs: in core modules, courses on geopolitics and in more technical ones (project management training for judicial and financing aspects, for instance). The question of language cannot be overlooked. Even though English is the dominant language of business, we must consider the teaching of Mandarin. Internships constitute another important aspect. There again, we must ensure that our students, shall, at some point, have their own experience of the “silk roads”.

The originality will lie in the fact that we shall offer these tracks with institutions which we do not necessarily work with as yet (geography or sociology, for example) present in countries that we do not automatically think about or target at first (Central Asia).

Probably the most specialised and difficult aspect, as such content does not exist yet. It will be multidisciplinary, transversal, complex, with no limits. Take for instance the logistics: what do the management of the Port of Piraeus, the Wuhan – Dourges (Pas de Calais) railroad line and the Toulouse airport have in common? It is up to us to design content rapidly, adding to it a dimension of soft power. Content will be a key element in the new war of influence. A solution may be found using digital technology and the design of MOOCs. In any case, we shall need to be innovative and include fully our faculty in the process. The debate around the “usefulness” of research is fully expressed here!

4- To establish new types of relationships with businesses

Again, changes are expected. Our priority won’t be to target French businesses anymore but to target all those companies that are, in one way or another, involved in this vast project. What great opportunities ahead!

5 – To think about new models of internationalization

This is, without a doubt, the biggest and the most impactful consequence on the strategy of our schools. Up until now, we mostly had an internationalisation based on market or geographical approaches. With the new silk roads, our approach will become more theme-based and transversal. We shall build our internationalisation on these themes.

Nevertheless, we have no choice. We are doomed if we do not get involved in this project. Let’s rather consider this like a fantastic opportunity! This new vision of the world may drive us, European Business Schools, to reshuffle our cards.

And question our positioning: While the dominant American brands will sustain their positioning and influence, how should we proceed to maintain and develop ours? 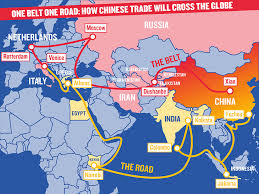