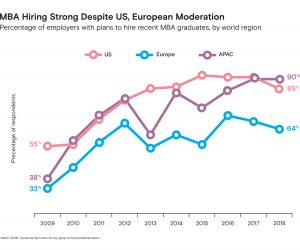 Among all respondents globally, 52 percent of companies plan to increase MBA starting base salaries this year. Around the world, MBA graduates continue to command a salary premium relative to direct-from-industry hires and bachelor’s degree hires. The projected median base starting salary for recent MBA graduates in the United States in 2018 is US$105,000, compared with US$85,000 for direct-from-industry new hires and US$65,000 for bachelor’s degree new hires.

“Over the past several years we have tracked positive trends in hiring of MBA and business master’s graduates,” said Sangeet Chowfla, GMAC president and CEO. “Graduates are commanding compensation premiums and companies are increasing starting salaries. The softening in the in the intent to hire numbers for the US and Europe reflects the global economic growth numbers we are seeing, and the prevailing political and student mobility issues. In the Asia Pacific region, hiring projections have remained strong. From the overall analysis, we see that MBA hiring overall is strong, but we are seeing the mix shift geographically.”

The survey also found that US employers’ intent to hire international business school graduates has softened this year.

“This dip in stated intent by US employers to hire international graduates is potentially a response to the changes – or potential changes – to visa and immigration regulations,” said Chowfla. “Even though H1-B visa rules haven’t yet changed, there is a perception that they might change in the near future, and some employers may be waiting to see what will happen. The jobs market in the US right now is robust, and companies are constantly having to evaluate their prospects and how best to fill their available roles with strong talent.”

Jamie Belinne is Assistant Dean at Bauer College of Business at the University of Houston, and President of the Board of Directors of the MBA Career Services and Employer Alliance (MBA CSEA), which partners with GMAC on the Corporate Recruiters Survey. “The GMAC survey reflects MBA CSEA’s recent Recruiting Trends Survey, where 68% of schools indicated a decline in hiring for international full-time MBA students compared to the same time last year,” said Belinne. “As a result, many schools are more actively promoting a global job search as well as creating connections with employers in students’ home countries.”

Eric Cornuel, Director General & CEO of EFMD, commented on the survey results: “The softening intent to hire business school graduates by the US and European employers, with only 47% of US companies planning to or are willing to hire international talent, means that business schools need to take an active role in placing their students through sustainable corporate engagement. The 2018 survey results proved that most employers plan to bring on business school interns in 2018 while 65% of students seek work opportunities both in their current country of study and outside of it, as showcased by our recent EFMD Highered Global Career Services Student Survey.”

A new benefit asked about in this year’s survey is student loan repayment assistance. Deemed the “hottest employee benefit of 2017” by Forbes, its seen by employers as an effective way to attract and retain top millennial talent. The survey found that nine percent of US companies currently offer it as a part of their overall benefits package.

Other hiring trends outside the United States – MiMs, Maccs & Mfins

Since 2001, the GMAC, together with survey partners, EFMD and MBA Career Services and Employer Alliance (MBA CSEA), has conducted the Corporate Recruiters Survey. The survey provides an overview of current employer hiring demand for MBA and business master’s graduates and examines hiring practices and trends by industry and world region. The survey was conducted in February and March 2018, in association with career services offices at 96 participating graduate business schools worldwide. The survey responses were received from 1,066 employers in 42 countries worldwide who work directly with participating business schools.

In July, GMAC will publish a companion report regarding skills sought by employers.