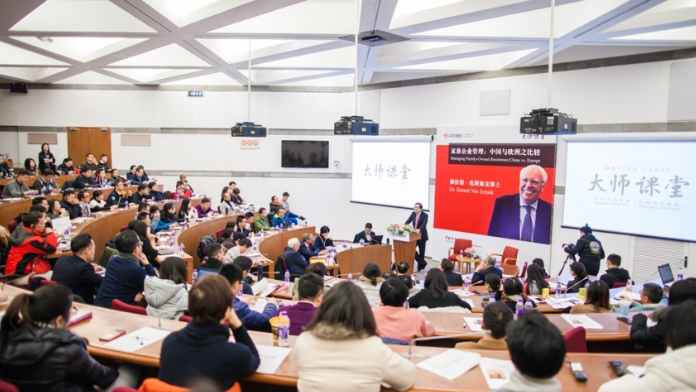 February 7, 2018. Shanghai – Outside talent tapped to manage family-owned businesses should never forget that the company belongs to the family, which they are there to serve. The trick is to find the balance between keeping owners happy and taking a stand, when needed, to protect the company’s long-term future. That was among the nuggets of advice Gerard van Schaik, former CEO of Heineken, a family business that became a global brand, served up during this evening’s Master Class at CEIBS Shanghai Campus. Van Schaik is also Co-Chairman of the CEIBS Board and Honorary President of EFMD.

“You have to accept that the family’s interest is predominant when there is a majority, and you have to serve it. If you can’t accept that, from time to time, the family may want you to do something you think is very unwise, then don’t work for a family company. You can’t avoid those situations. It’s THEIR company not yours; you should have those words over your bed,” he said. “You may be given total managerial freedom, but you cannot ignore the family interest. At the same time, there are certain moments in your life when you think [a particular course of action not supported by the owners] has to be [taken]. Either take a risk, or resign; but you have to deal with the issue.”

In an anecdote-rich presentation he also gave advice on topics such as when the family firm should look outside for expertise, the skills needed to run a family business, and how family-owned firms should prepare for going global. His responses were practical and he frequently drew on examples from his career at Heineken as well as his time as a non-executive board member at firms including ABN-AMRO, Philips, Sara Lee, DSM, etc.

Van Schaik also weighed in on the challenging issue of succession, especially for firms with global ambitions.  “If it’s an international company, or one that wants to go global, the family member destined to take the helm must have had international exposure,” he said. “They need to be conscious of the world outside, with its different ethics, different political structures.”

Vital elements that would help in these situations and generally in successfully running a family firm, he said, include deep understanding of the family and respect for the business they had built. It was also crucial, he said, to have trust between the owners, outside talent and other stakeholders. “If you’re not completely straight with people, you sign your own death warrant,” van Schaik told the packed lecture hall.

CEIBS Dean Ding Yuan, who moderated the event, echoed van Schaik’s views on the need for owners of family businesses to leave room for non-family member CEOs to do their job. He added that van Schaik’s advice that owners should never bypass their CEO and give orders directly to subordinates was particularly challenging in China where “information asymmetry is power”.

In a glowing introduction of the evening’s guest speaker before his lecture, Dean Ding also announced the launch of a research fund in honour of van Schaik. Under the research proposal, “Aged to Perfection: Benefits from An Inactive Population” the goal is to attract four projects, over a 12-month period, to examine the timely issue of how aging members of society can still add value. As van Schaik explained in his inimitable style of shooting straight from the hip, the idea is to look at “how to deal with this ever-increasing lake of people that have been made redundant and have nothing to look forward to.”

Van Schaik’s hour-long lecture was followed by a brief but spirited Q&A in which both he and Dean Ding fielded questions from the audience.

Master Class, a high-end brand event, was launched in 2014, when CEIBS was celebrating its 20th anniversary. It aims to invite the most influential corporate leaders and scholars from home and abroad, providing direction, inspiration and entrepreneurial spirit for students and alumni. 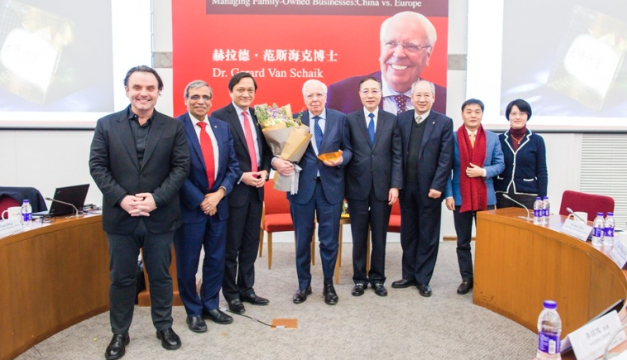